Earlier this year, I wrote about an Albuquerque city bus driver who was distracted while munching on a burrito during his route along Central and rear-ended another car.

Earlier this week, we had another incident of a driver under the influence of burrito (DUIB — I think it could be pronounced “dweeb”).

In this case, it was an Albuquerque city policeman who, while taking a prisoner to the city-county correctional facility,  was captured on his police cruiser’s dash cam driving with his knees on the steering wheel while eating not one, not two but three burritos.

When the incident was first reported, the Albuquerque Police Officer’s Association said it was not a crime to eat a burrito in a police car while on duty. Then the video of steering with knees was released and the burrito incident was apparently topped off with big serving of crow. 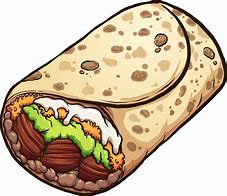 In all fairness, my daughter once had a friend, who while driving to a concert in Phoenix, took a picture of herself driving with her feet. And I’ve been known to order extremely stupid things to eat while driving — a chili cheese dog for example — which certainly took away a lot of my focus on keeping my car straight while hurtling down the Interstate at 75 miles per hour.  Honestly, a burrito would have been much safer — they’re probably the best choice if you have to eat at the wheel.

All of this got me to thinking about why burritos often seem to invoke funny responses or comments.

I found it humorous last year when our neighborhood Mexican eatery added WiFi and announced to customers that the password was “Burrito 1.”

And further down the street, there is a Mexican food carry out place in a convenience store which specializes in burritos. The kitchen offers no less than 81 varieties of burritos. And they have names for everyone of them: “Macho Man,” “Breakfast Bomber,” “Burrito Too Far,” “Jerry Springer” “Junkyard Dog,” “Ultimate Sin” and my favorite, “The Undertaker.”

But in keeping with the oddly humorous nature of burritos, the employees are asked to wear t-shirts that announce “Body By Burrito.”