My late brother once told me about a controversy at the then new baseball stadium for the Los Angeles Angels when the concessionaire decided that it would be “California appropriate” to serve quiche to fans. I’m not sure you remember it, but there used to be a Chevrolet advertising campaign with an all-American spin and a song that went like this:

“Baseball, hot dogs, apple pie and Chevrolet. They all go together in the good old USA.”

While the song likely resonated with baseball fans, it clearly didn’t appeal to the interest of the Angels concessionaire who felt international cuisine was more in line with tastes of the southern California fan base. I’ve only been to one Angels baseball game, and I don’t remember seeing if quiche was still on the menu.  Ridiculously expensive hot dogs, yes.

Apparently a desire to keep things “all American” showed up in a public hearing several years ago in Albuquerque. The focus of the hearing was the planned construction of a traffic roundabout — something itself very foreign at that time in many western states.

When the hearing moderator said that traffic would flow smoothly as drivers waited in a queue to enter the roundabout, one attendee stood up to declare that: “This is America!” We don’t say ‘queues’ in America. We say ‘lines.’ We stand in line, we wait in line. We do not queue!”

I’m thinking that the location of the roundabout would have been a great place to open up a quiche takeout stand. 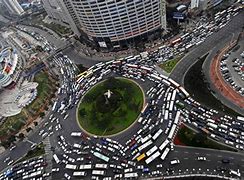