(With apologies to Daivid Letterman. And bear with me, this post might be a bit long and philosophical… )

Many years ago, my father, who prided himself for his knowledge of New Mexico history, told me that when the territory was being considered for statehood, there was consideration given to calling it “Lincoln” instead of New Mexico. After all, the notorious town of Lincoln, located in Lincoln County, seems to have had some considerable significance in the history of the territory. And another of America’s great presidents, George Washington, had a state named after him — so why not Albuquerque, Lincoln, or Las Cruces, Lincoln, or Lincoln, Lincoln.

I’ve done some research and I can’t seem to find any evidence of consideration of the name Lincoln. I do think at one time I remember reading that the name “Montezuma” was considered for the state’s name. I could not find any information on that either. A good friend and a well-respected New Mexico historian who has published several books about the history of our state, also said he was not aware of the name “Lincoln” being considered. He said that perhaps had heard about the consideration of Montezuma as the state’s moniker.

I looked in a book we’ve relied on for years to accompany us along our New Mexico journeys for some additional clues. It’s called New Mexico Place Names, a 1965 publication compiled by T.M. Pearce using materials collected by the 1936 and 1940 New Mexico Writer’s Project. (I note that it was revised in 1969 and re-released by the University of New Mexico Press — its original publisher — and renamed The Place Names of New Mexico by Robert Julyan.) The original version makes no mention of whether the name “Lincoln” was ever considered and notes that the name “New Mexico” — at the time “Nuevo Mexico” — was first used by Spanish explorer Don Francisco de Ibarra in 1562.

The historic town of Lincoln and Lincoln County were indeed named after President Lincoln. The New Mexico Place Names even notes that a rock structure near the present day town of Lincoln resembles the profile of President Lincoln. (Having grown up in Lincoln County and explored most of it, I can’t recall seeing that rock structure, but I’ll be sure to look for it the next time I’m in the vicinity.)

I’m not sure where my father picked up the notion that “Lincoln” was considered for a state name, but it has always left me wondering about whether the state’s name has had an influence on its development over the years.

So here’s my point and a question to you. How different would New Mexico’s fortunes have been if it had been named something else?

I need to be careful here because I do not intend to be disparaging in any way to the Republic of Mexico and its wonderful residents and culture. However, I think it is safe to say that most Americans tend to have a more pejorative view of Mexico than, say, Canada. In fact, much of the upper Midwest was called “New Canada” following the 1803 Louisiana Purchase. Maybe North Dakota or Minnesota could have ended up being called the state of “New Canada.”

If you look at the map below, part of what is now New Mexico was part of the Louisiana Purchase — so who knows, we might have ended up as “New Canada.” 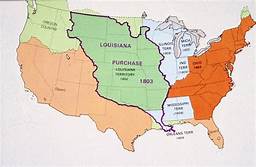 So here is New Mexico, perhaps seen in the prejudicial mind’s eye of many who think of us as just an extension of a country with less ambition, progress and future like the bordering nation to our south.

Consider Arizona, with many of the attributes of New Mexico had when it became a territory. It had similar geography, a sparse population, an arid climate, rugged terrain, not much water, a large native population, lack of cultural amenities and lots of bad guys roaming around. Yet Arizona, compared to New Mexico, has been more of a success story in terms of its progress.

I know that New Mexico offers much more than Arizona in terms of natural resources, scenic beauty, artistic offerings and climate. And the influence of the Mexican/Hispanic and Native American cultures have blessed this state with a uniqueness that Arizona does not seem to embrace to the extent we do.

And of course, we’re always being confused with our neighbor to the south. Readers of the New Mexico Magazine always turn to the “One of our 50 is Missing” section for humorous instances of ignorant confusion about our existence. (I’ve been subjected to these kinds of insults myself over the years. As I mentioned in an earlier blog, I once found a kitchen magnet with the outline of the state of New Mexico decorated with a saguaro cactus and the words “Arizona” overlaid on it.)

But New Mexico always seems to end up at or near the bottom of the “worst” lists. Why? I’m sure many will blame political influences, cultural reasons, actions of the early explorers in colonizing the region, secular and non-secular influences, bad karma, etc. But is it that, or is part of it just the name we’ve been given? I ask that you focus JUST on our name and not look for blame elsewhere.

I’m always sad that we can’t do better for our children and education, that we can’t make an improvement in our poverty rate and lament that our economy is not as good as surrounding states. Yet somehow, I guess I’m glad New Mexico is always a little off the radar screen so we can enjoy the things that others don’t see in us. I’m always proud to say I’m from New Mexico, despite its warts, but I don’t want it to be discovered any more than it already has been. Maybe a lot of other people feel that way too, and in a way, we’re all partially responsible for our situation.

I’d sincerely appreciate your thoughts on this question about how our state’s name may or may not have influenced others about the stature of our state. Again — just focus on our state’s name. And again, I hope I haven’t offended anyone.

And by the way, I’ve always wondered if my life might have been different if I had been  Patrick Wolf instead of Patrick Lamb.