I hoped that headline would get your attention.

It’s the scientific name a spectacular variety of purple thistle that grows only along the waterways and canyons in the Sacramento Mountains of southeastern New Mexico. The common name is “Sacramento thistle.”

I’ve always appreciated these plants with their purple puff-ball flower, sometimes growing as tall as six feet. I’ve found them mostly along the Rio Penasco and Augua Chiquita creeks, but you can encounter them almost anywhere in bottom of the shallow canyons of the Sacramentos.

My wife and I spotted this and others on a recent trip to the mountains to get away from the 100 degree-plus heat we’ve been experiencing this summer in Las Cruces.

I remember first seeing them when I was a kid growing up in nearby Ruidoso. We didn’t ever see them in our part of the mountains, but they were always evidennt when we drove about 40 miles south to visit Cloudcroft.

Later on, when I began fly fishing on the Rio Penasco and the Augua Chiquita, I found them to be quite a nuisance. Because they were so tall and tightly clustered along the banks of these two small tributaries to the Pecos River, they made casting into the narrow pocket water difficult, with lots of flies snagged in their sharp leaves.

Unfortunately, the Augua Chiquita has likely lost its population of beautiful brook trout due to continued years of drought.  It was an interesting place to fish. You only got one chance per hole or stretch of water to catch the easily spooked trout. As soon as you pulled one from the water, any others nearby would duck for cover under the banks or scoot upstream or downstream. During spawning season in the fall, they are the most beautiful fish I’ve ever caught, with iridescent blue, orange and yellow spots on top of a dark green background and bright yellow belly and orange fins with white trim. 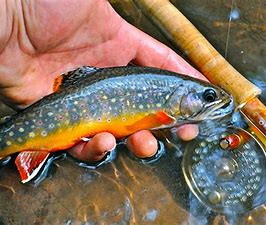 But as I said, sadly, the last time I checked on the Augua Chiquita, it was completely dry for most of the year.

But back to the Sacramento thistle. I ran across an article from the U.S. Forest Service about the plant and found out some interesting things about it. It only grows across about 75 acres of land in the Sacramentos. It is currently listed as a “threatened” species. The thistle has specifically adapted to the travertine and limestone soils formed when the earth uplifted part of an ancient shallow sea which covered much of what is now eastern New Mexico and a large swath of Texas.  This part of the country is now known as the Permian basin, the oil and gas producing “breadbasket” of our nation.

Here’s a link to learn more about rare thistle if you’re interested:

It’s worth the trip to drive up to the Sacramentos during the monsoon season to appreciate the unique beauty of the region. Besides the thistle, we found lots of other flowering plants to admire, including ones I photographed below.