I wrote this for my grandchildren last year, but I can’t take complete credit for all of it. I borrowed some wording and thoughts from similar New Mexico interpretations of “The Night Before Christmas.”  At any rate, it makes me realize how fortunate we are to live in a place that has so many multi-cultural traditions, especially around Christmas.  Hope you enjoy this and Margo and I (and Chester) wish you a happy holiday season. 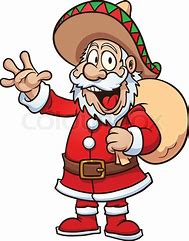 Twas the night before Christmas in Nuevo Mexico

And everywhere luminarias were starting to glow.

The stockings were hung by the horno with care

In hopes that Pancho Claus soon would be there,

Outside on the porch, ristras swayed in the breeze

And as the sun dipped down, it was starting to freeze

Los ninos were dreaming, all warm in their beds

And swung at pinatas that danced in their heads

Mamma and Chester (our dog) were snoozing away

In a bed that left me no room to lay

So I sat in a chair watching the pinon fire die

When I heard a strange noise coming down from the sky.

Which was soft and white from a snowfall at dawn

We don’t get much snow in the desert, you see

So the view outside was exciting to me.

Then suddenly I spotted something that was even more to behold

It was pack of coyotes with a wooden cart in tow

In front of the coyotes with a beak that was red

Was Rudy the roadrunner, who was always ahead.

And driving the cart was a fat jolly man

Wearing a sombrero and a waving his hand

It was Pancho Clause, of that I was sure

And he called to his coyotes as they ran in a blur.

On Cisco, Jesus, Juan and Manuel

Over the mesquite bush, don’t linger and stall

Through cactus and sand dunes, now dash away all.”

So up on my casa the coyotes flew

With a cart full of toys and Pancho Claus too

And a noise from above gave me a start

Coyotes howling as he stepped off his cart

He slid down the chimney with his bag full of toys

And began his work without any noise.

He wore a pony tail at the back of his head

And his velvet Navajo shirt was a cheery red.

His shirt was laced up with fine goatskin leather

And his face was rugged from the Southwestern weather

His eyes were like turquoise, his dimples so sweet

His nose and his cheeks were like red chile heat.

The steam from from a pot of posole in la cocina

Formed a shape over his head that looked like a Zia

He was a true Land of Enchantment elf

And I laughed when I saw him, in spite of myself.

But seeing his smile, I knew I had nothing to dread

Knowing that soon I would be back in my bed

Filling up the stockings, then turned with a jerk.

He’d noticed biscochitos we’d left him for a snack

And stuffed a few of them for later in his pack

Then before I could blink, back up the chimney he went

Leaving only the smell of a sweet pinon scent,

He sprang into his cart, gave his coyotes a shout

And was gone just like that, to the next hacienda, no doubt

But I heard him call as his cart flew away

2 thoughts on “An Aero-Cordero Christmas…”